Khinalyg: Visiting the descendants of Noah

Khinalyg: Visiting the descendants of Noah

After several days of planning the trip, on a rainy Sunday morning in December, we started our route to one of the most high-mountainous settlements of Azerbaijan - Khinalyg. The purpose of the trip was not only acquaintance with the ancient heritage of Azerbaijan, but also a desire to play snowballs, because snow in Baku is a rare phenomenon.
The settlement is located approximately 50 kilometers from the center of Guba on the northern slope of the Main Caucasian Range, at an altitude of 2200 meters above sea level.

Since ancient times, until the road was built, the settlement was separated from civilization by rocky mountains and dangerous obstacles, which helped to preserve the inhabitants from enemies and modern life and to preserve traditions and own ancient language that does not belong to any group of languages.

On the way, I saw nice "traffic light" of delicacies, called "turshu lavash" at the store of local dweller and stopped to make a picture of them. 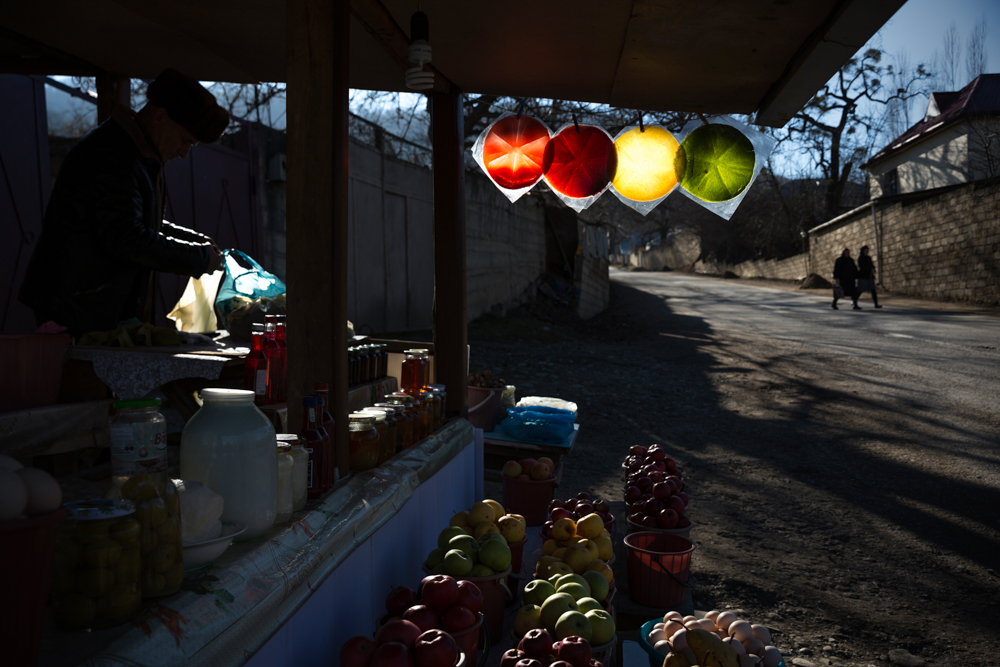 Tip 1: When you shooting with contouring light of the sun, expose the picture by the lightest areas. This will add depth to the colors and hide the extra details. 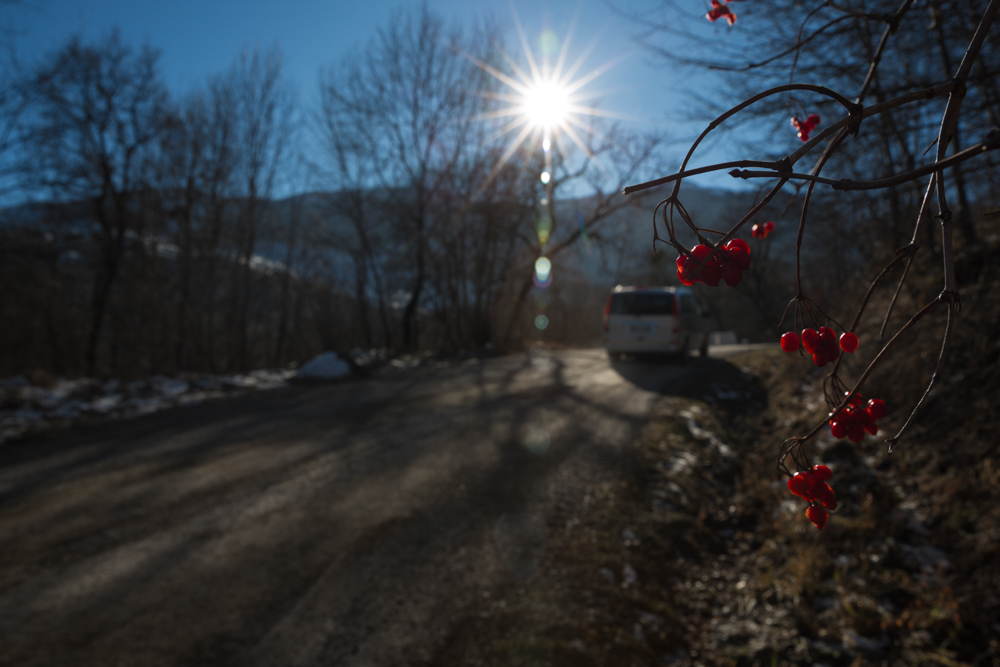 After half an hour's drive from the center, winding and in some places dangerous due to the rockfalls road become icy. After a heavy snowfall, it is almost impossible to get to the village.

After passing a pair of overhanging rocks over us, our eyes opened a breathtaking view of mountains of the Main Caucasian Range. The photo shows a thin road leading to the village named Jack, Galaykhudat, and then to Khinalig. 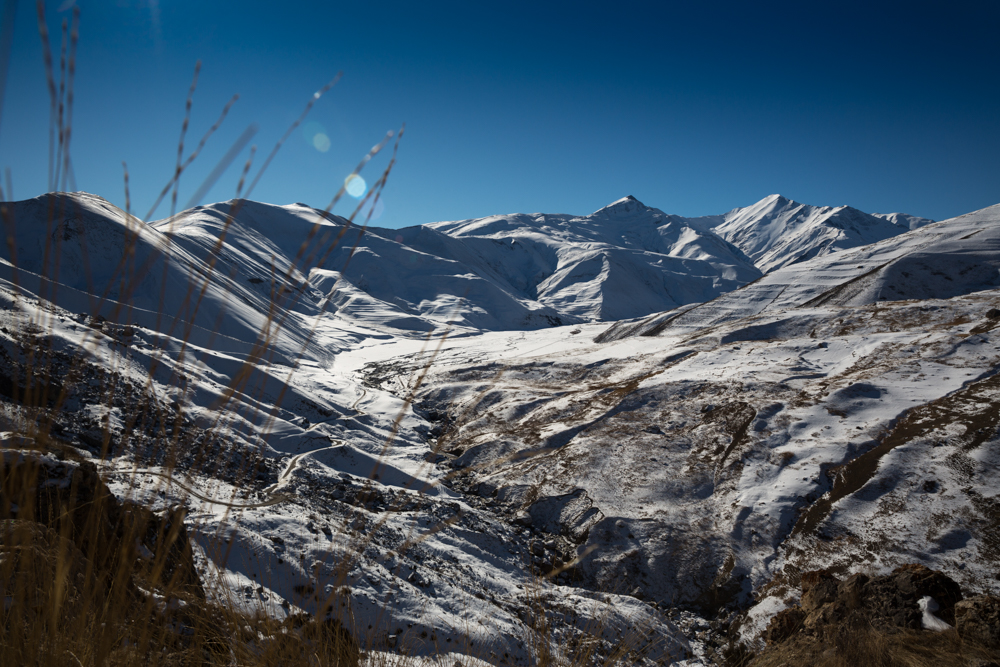 Life in the settlement is measured and calm, because of rarefied mountain air and a different atmosphere that lives here. 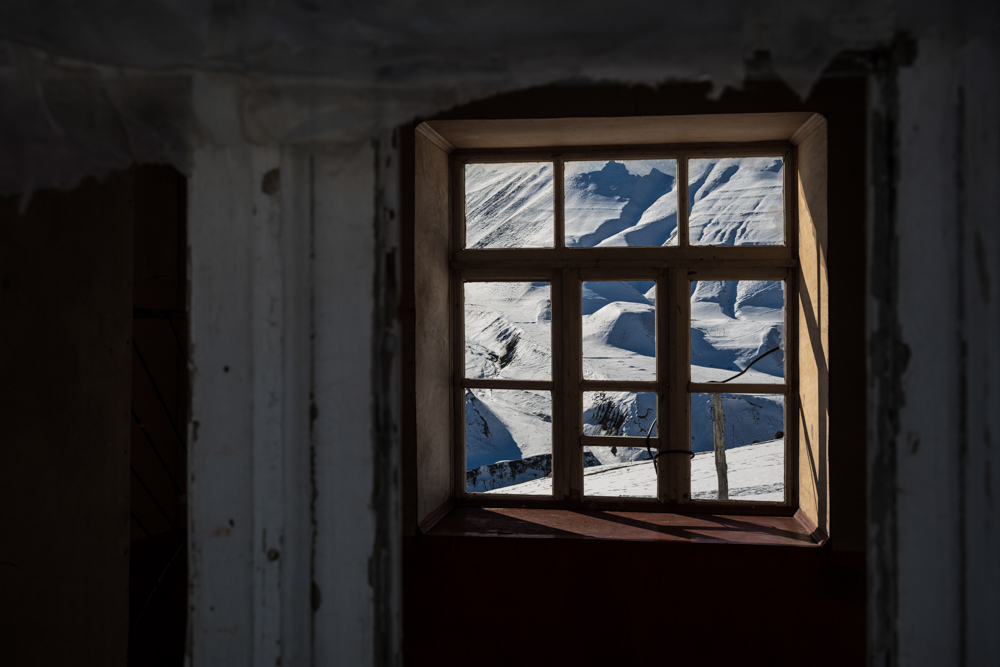 For first we reached the highest point of the village and the GPS showed the 2200 meters above sea level. 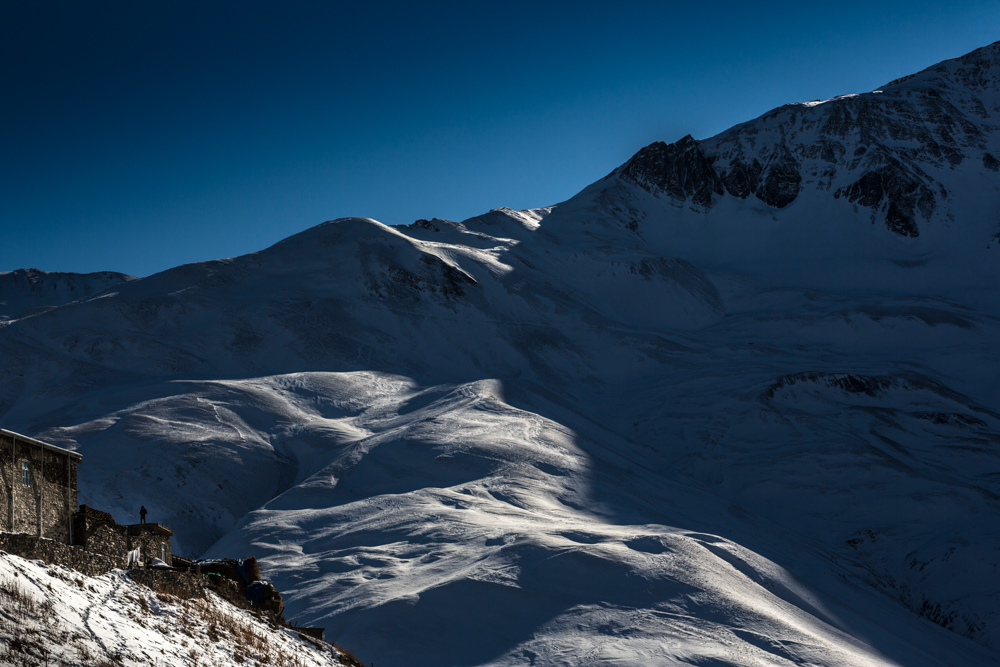 On the way we met a local old man, sitting peacefully behind his house. After an interesting conversation with him, I found out that the locals call the settlement of Kyat, and themselves - kyats. Also we heard an interesting legend, telling that the inhabitants consider themselves direct descendants of Noah. 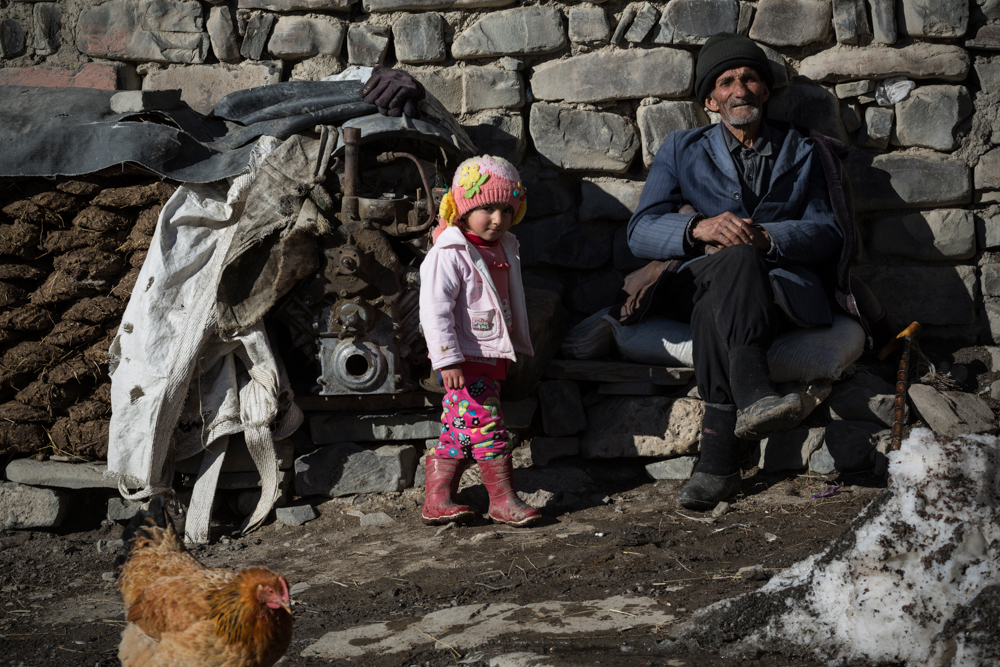 The population of Khinaliga is about 2000 people. The local people profess Islam, and before Islam they professed Zoroastrianism. 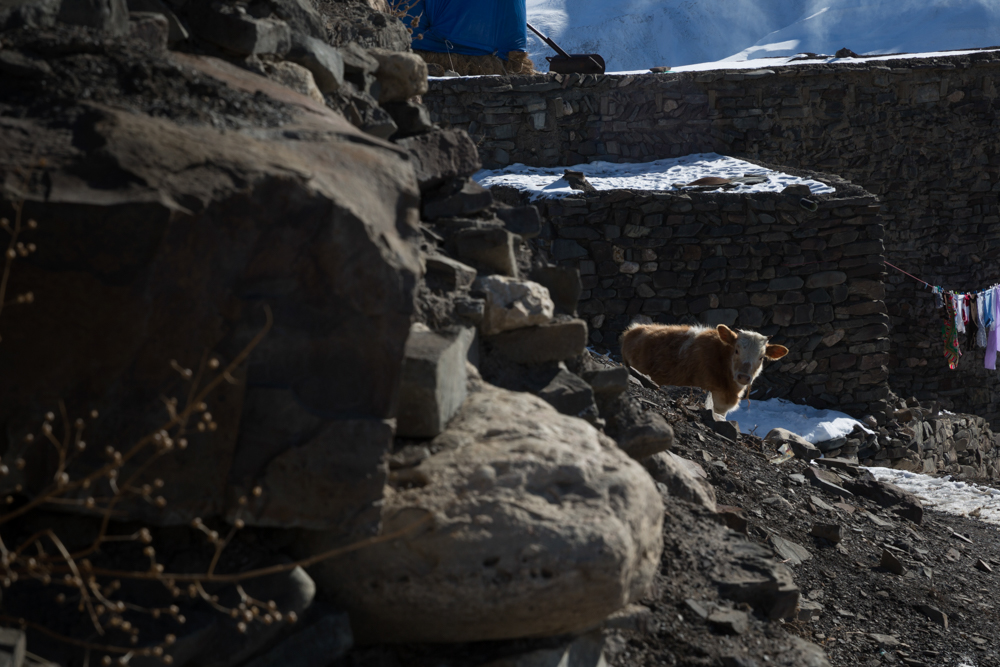 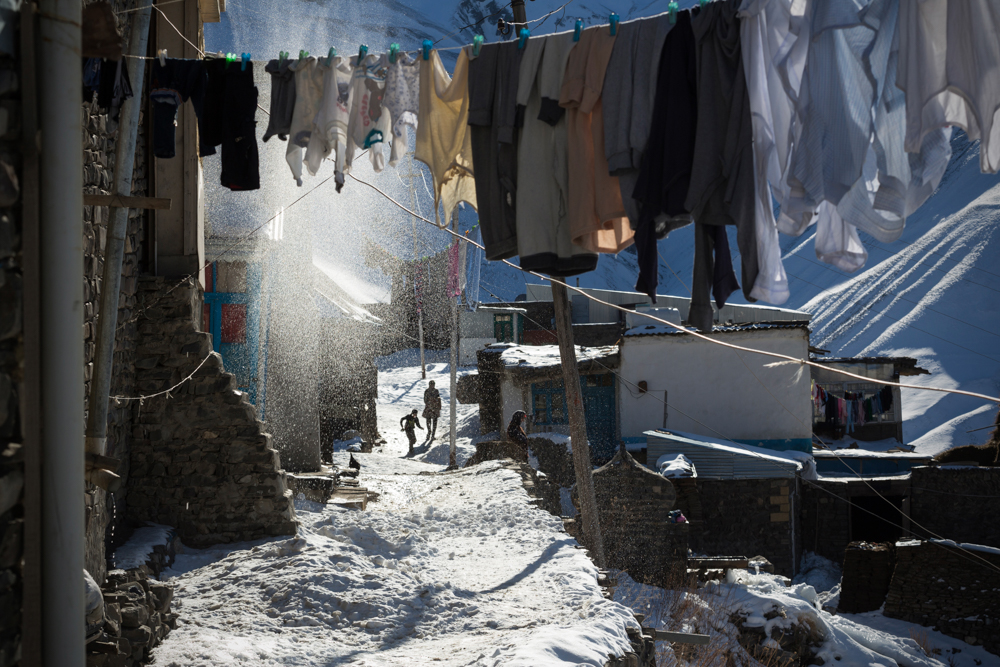 The land in mountain conditions is not prolific and wood is a rarity in these parts. Local, instead of fuel for heating houses, use a dried mixture of manure and tar, which dries on all available surfaces throughout the year, preparing for the winter. 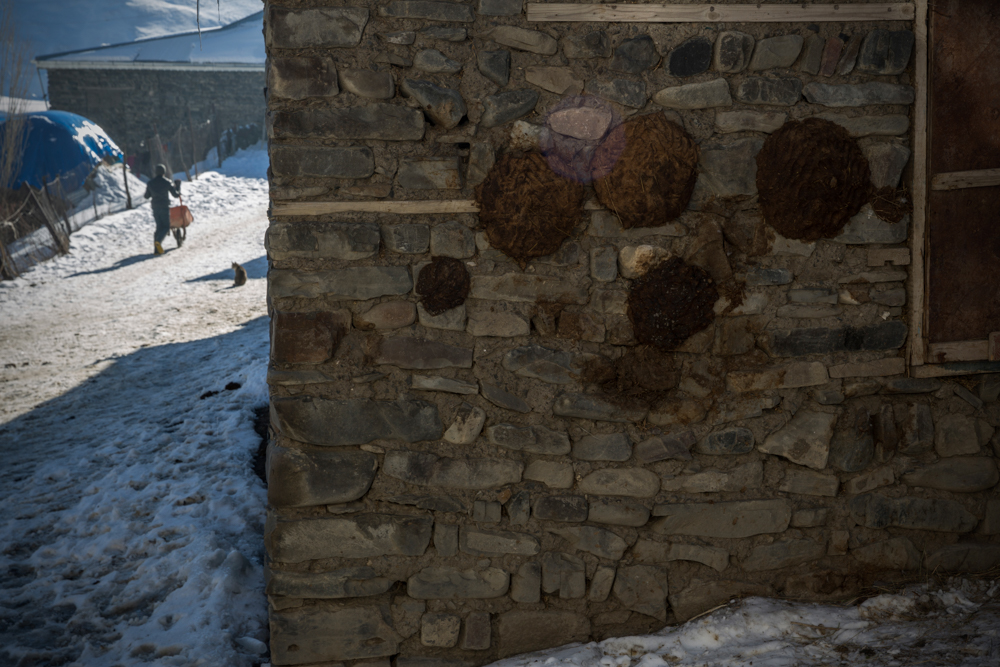 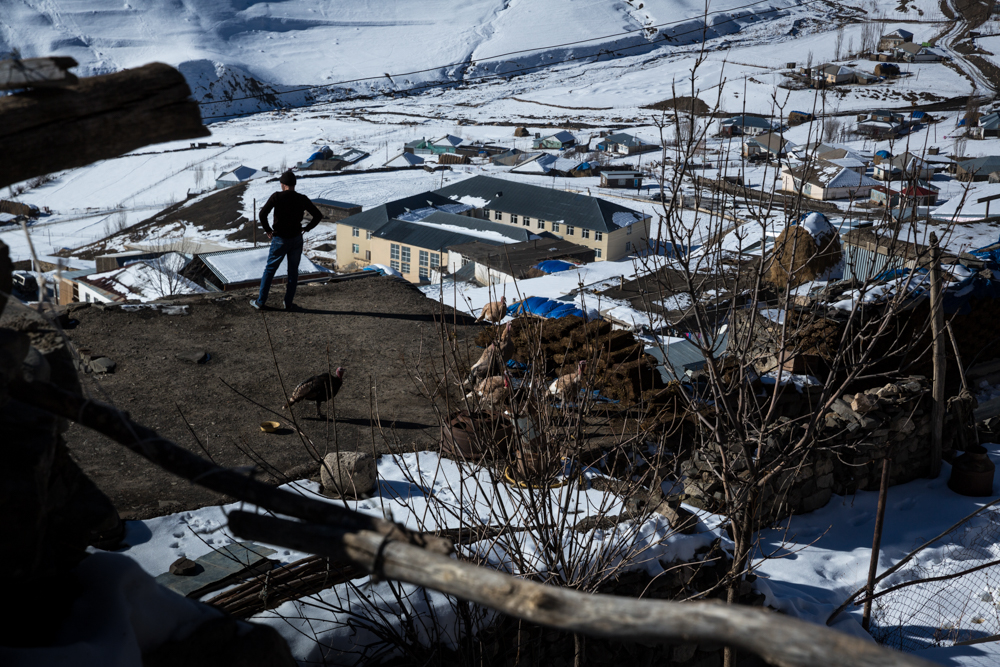 We took some sweets as we knew that we will meet many local children. Their childhood passes differently than the childhood of the city’s children. In winter, the main source of fun for them is sledging and snowballing. 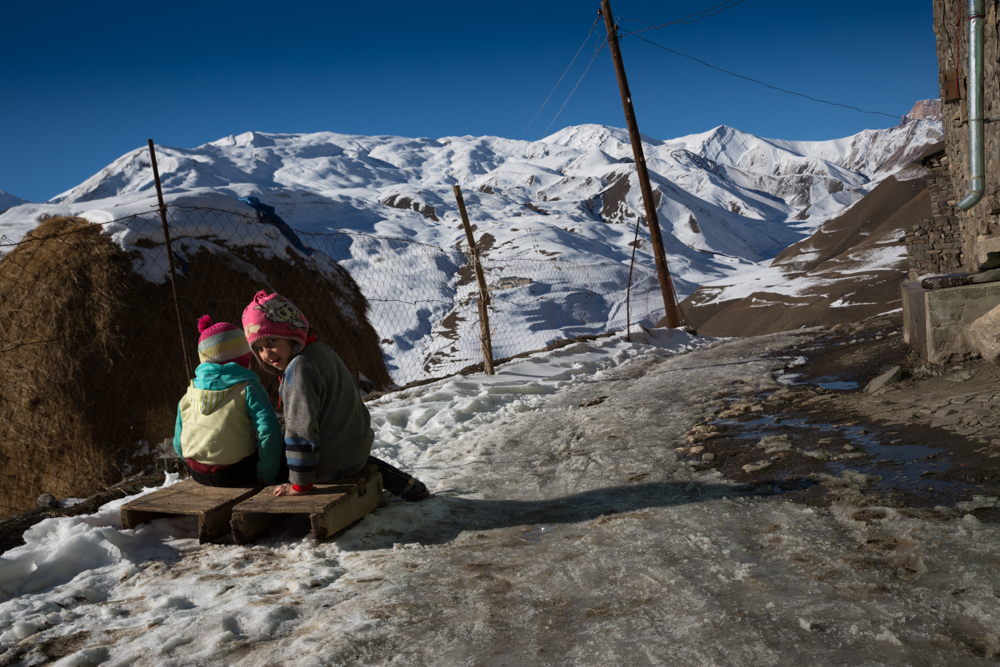 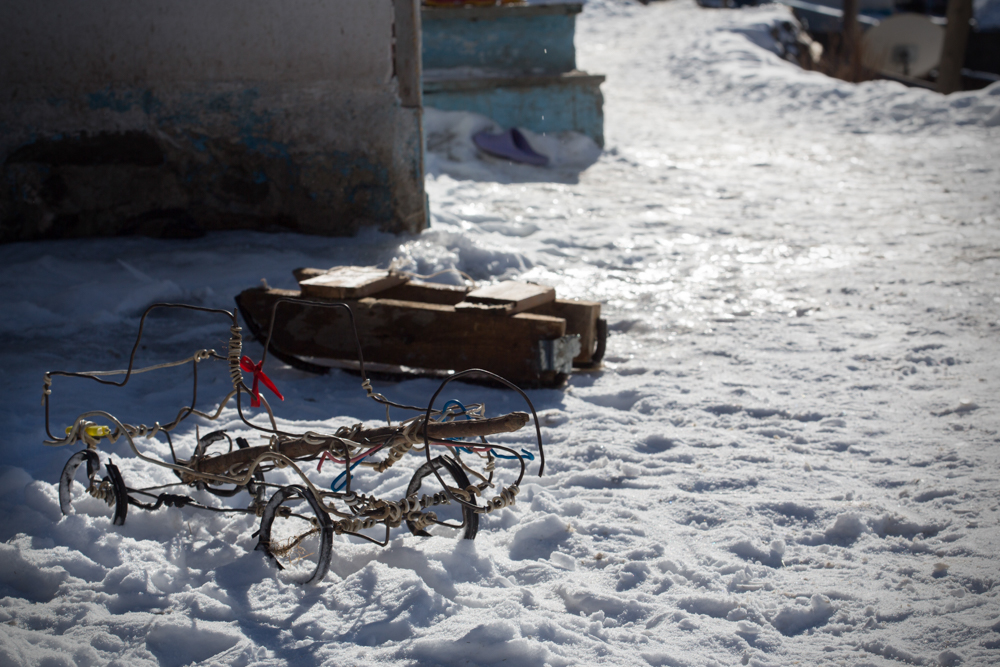 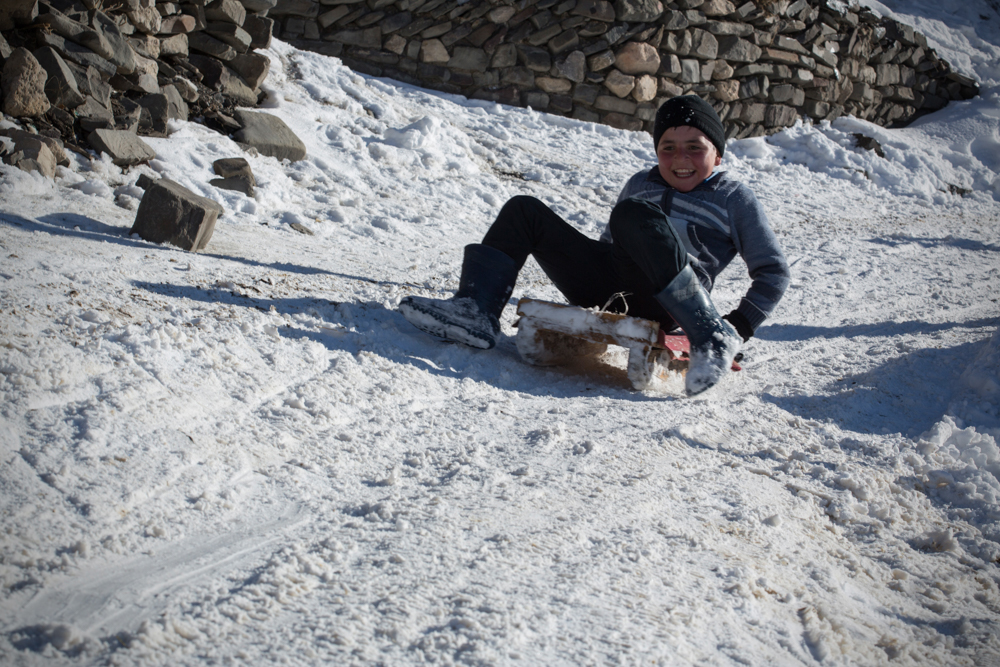 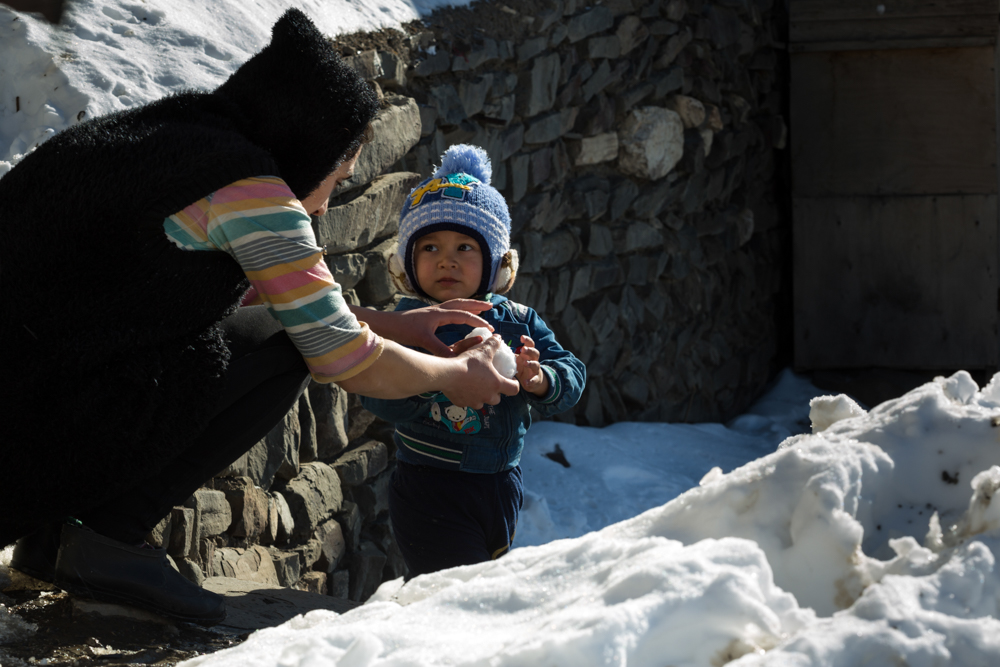 We were lucky to get in and even participate in one of the snow battles between boys and girls. As a result, after several “injures”, we went further to explore the village.

Tip 2: By playing the shutter speed, you can achieve the effect of movement, and make the photo more lively, which can not be done with shorter exposures. 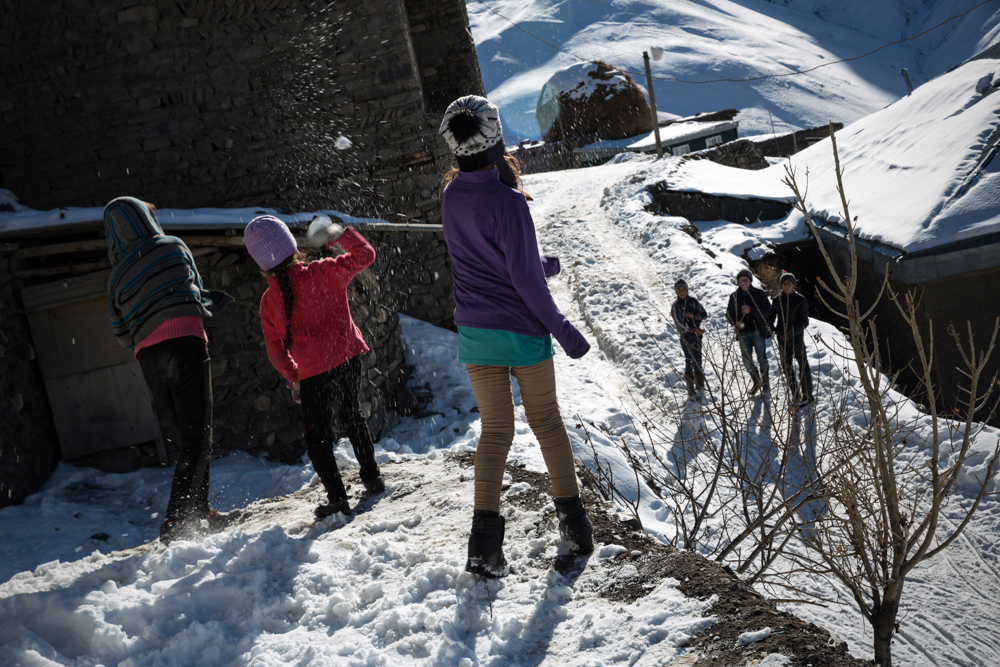 People are so used to see visitors and tourists that they practically did not pay attention to me, which made it possible to take pictures calmly. 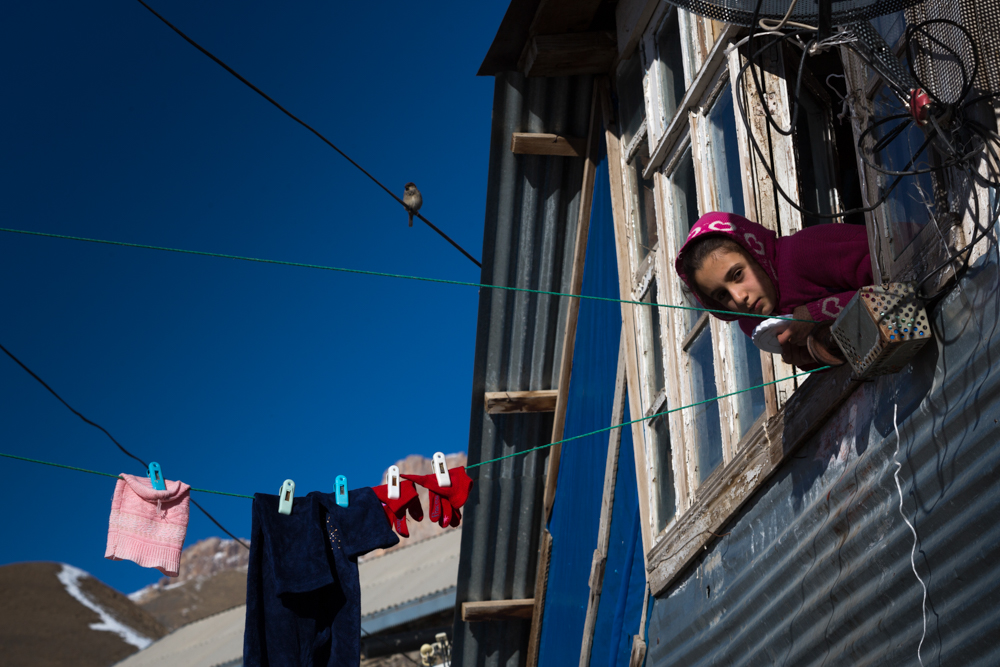 Also interesting fact that ten years ago, the village was declared as the State Historical, Architectural and Ethnographic Reserve of Azerbaijan. 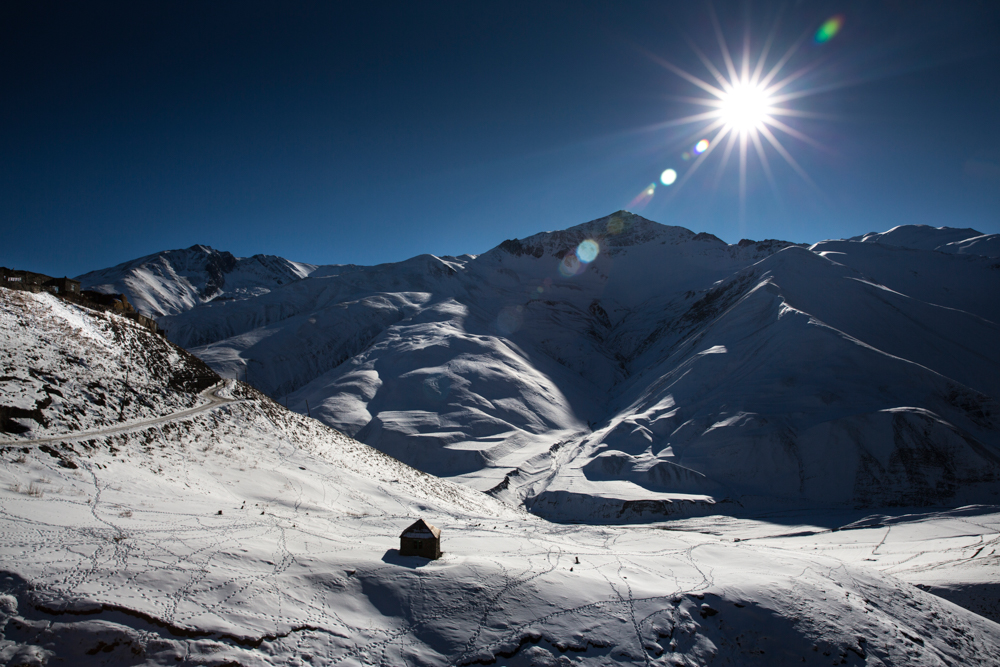 Tip 3: Sometimes a cloudy sky and soft light are not the best solution for shooting a landscapes. In this case, the harsh light of the winter sun perfectly showed the texture of the mountains and traces on the snow. 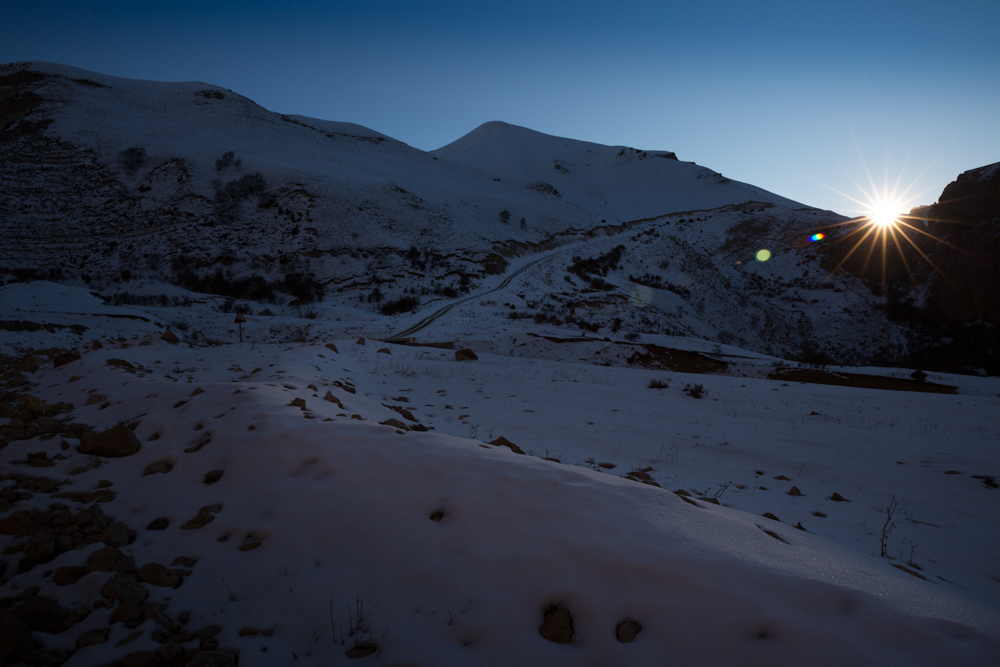 The sunny day was coming to an end and it was time to leave. Khinalig is a very spiritual place in the heart of the Caucasus Mountains, where you want to be in moments of fussy city life.